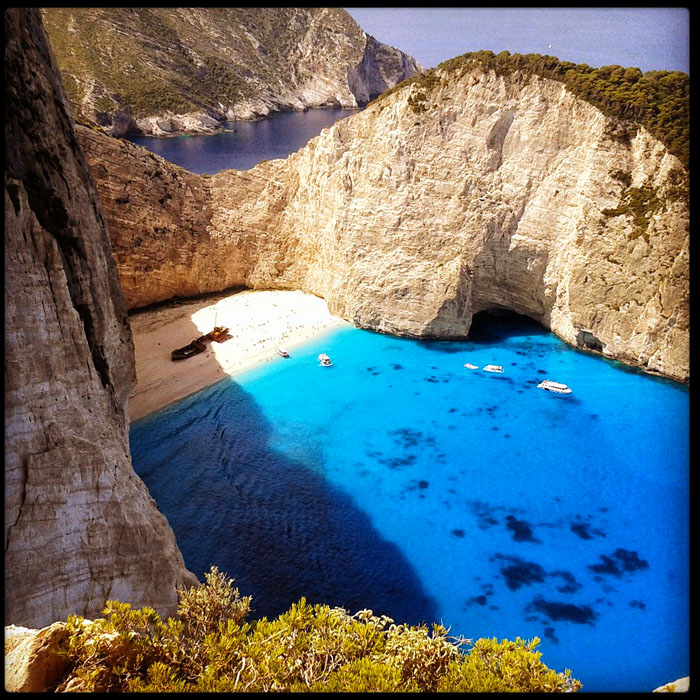 Wreck beach (Shipwreck bay) should also photographed from above. You can not climb to the top from the beach so you have to come to this place again by car. You can go top of the cliff to the viewpoint and make one of the most classic images in Greece. 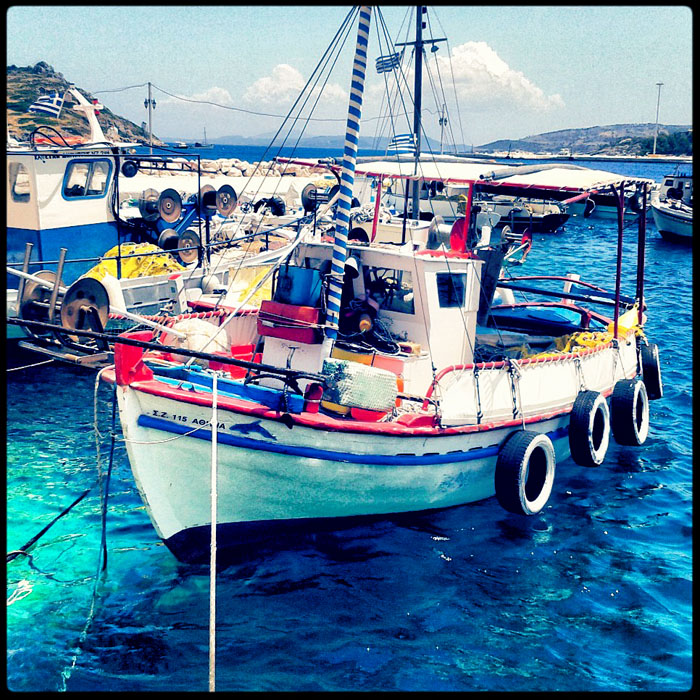 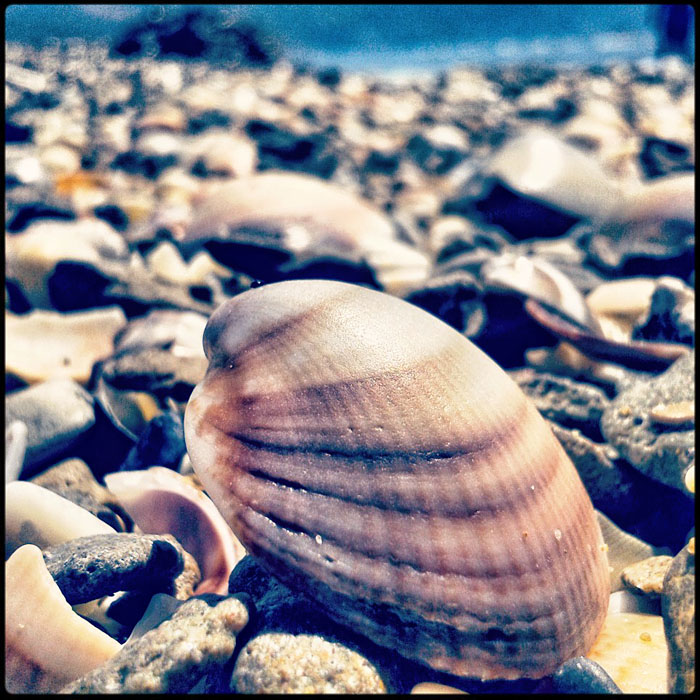 Beach, sea, shells ... Island of Zakynthos (Zante) is a great place to vacation and relax on the beach. Zakynthos is a small island so you can explore Zakynthos very slowly. 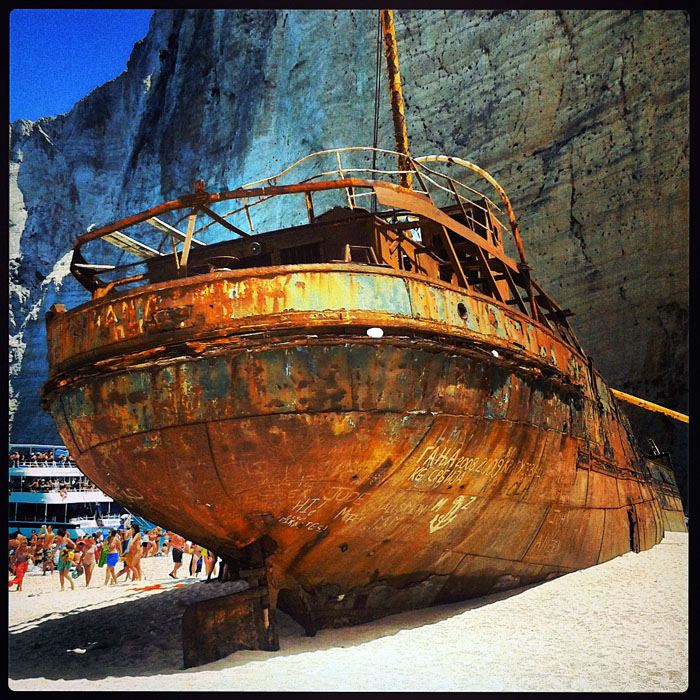 Shipwreck on the beach, Zakynthos

Shipwreck beach (Navagio Beach) or Shipwreck Bay. Amazing cliffs and beach hidden in a deep bay and the center of the beach is the wreck. This is one of the most famous places in Greece! 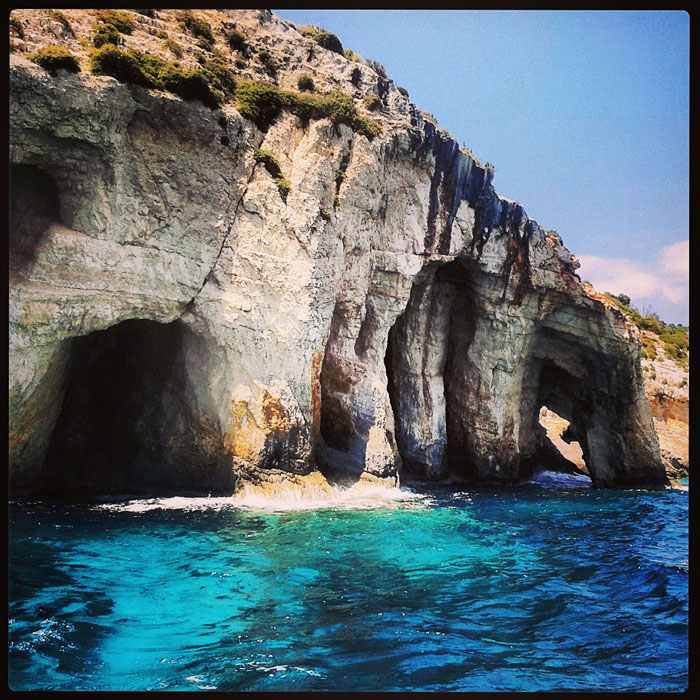 Cliffs and caves on Zakynthos

One of the major tourist attractions in Zakynthos - Blue Caves. Beautiful nature, amazing cliffs, blue (azure) water... You have to see the blue caves! 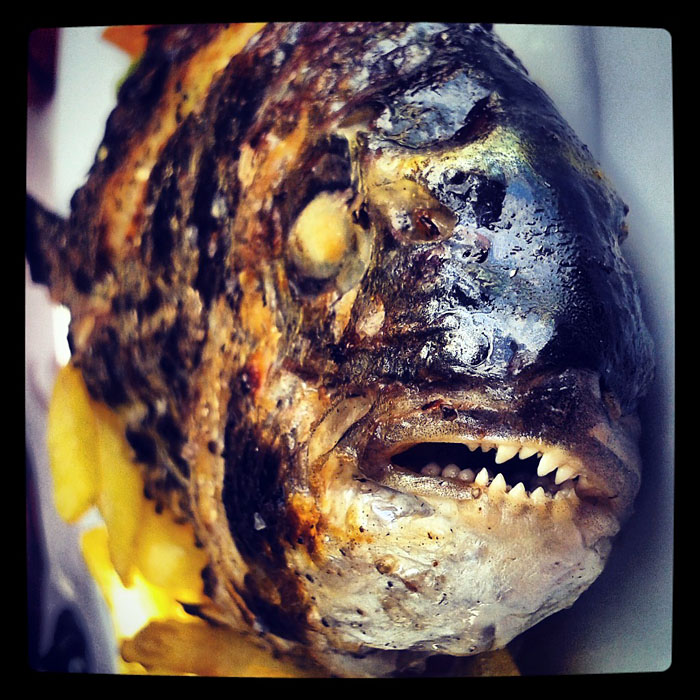 A typical Greek cuisine - fresh fish! Go to the greek restaurant (greek taverna) at the fishing port (in Agios Nikolaos) and enjoy a lunch! 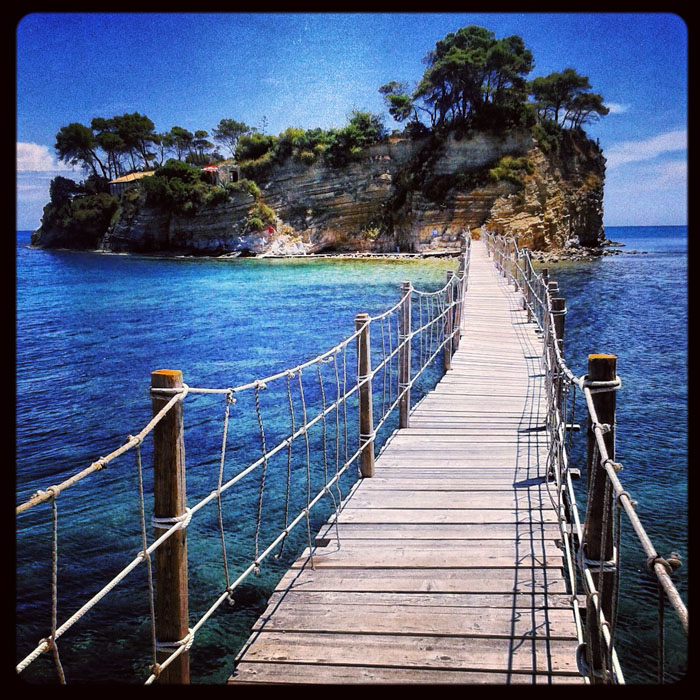 One of the most surprising places on Zakynthos to me. The bridge to the island and relax on a small beautiful beach. 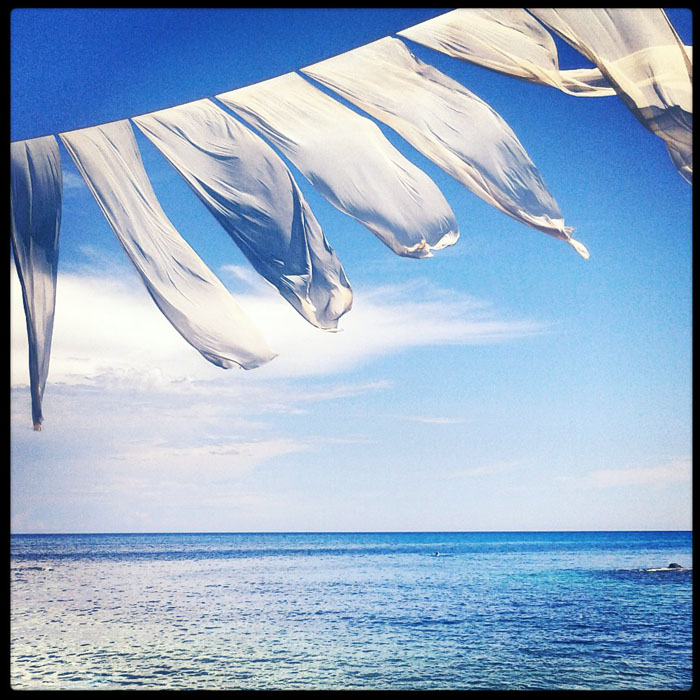 Very small island Agios Sostis near Laganas. A very small island with a great atmosphere and awesome place to snorkel - there is no better place near ​​Laganas and Kalamaki. 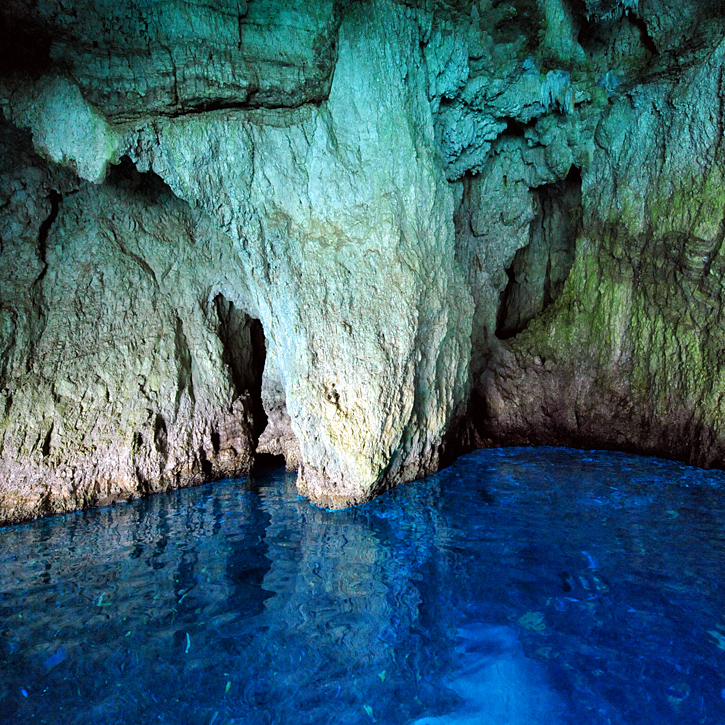 Blue Caves, Zakynthos island. Zakynthos - Greek island in the Ionian Sea. Blue Caves, in my opinion, should be called azure and turquoise. Color of water and reflection of this color on the rocks impresses! 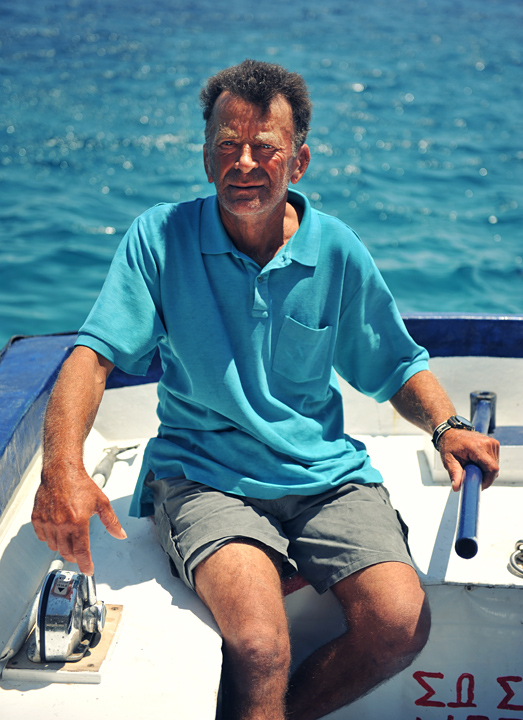 Cruise to the blue caves. Old fishing boat and very nice Greek. Caves are impressive and color of water is amazing! 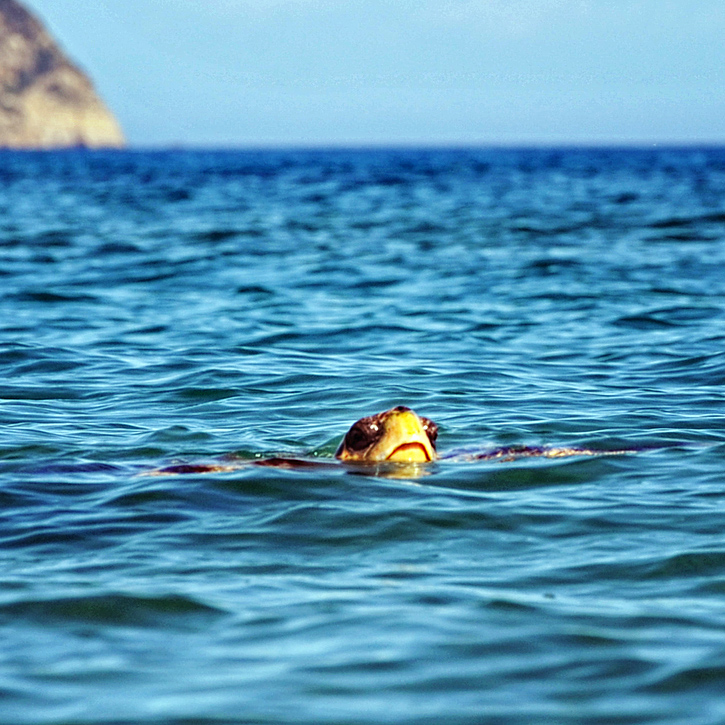 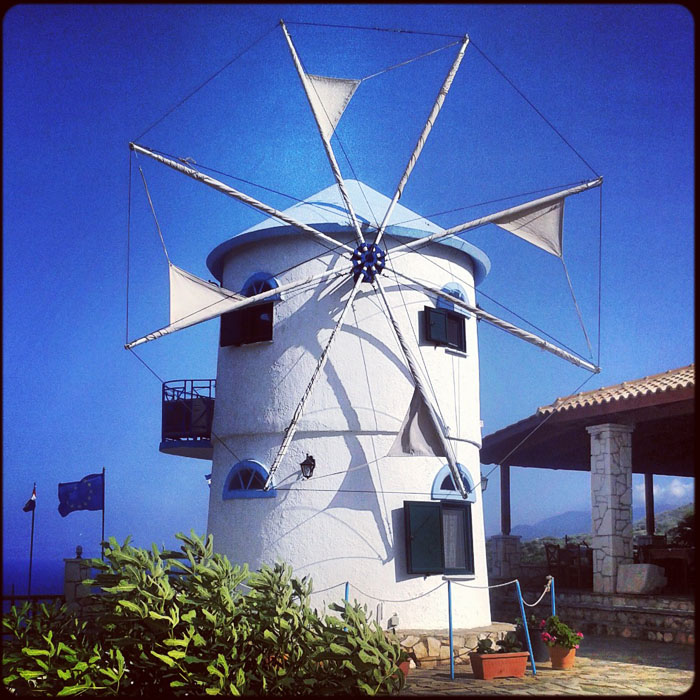 Peninsula, two windmills, stairs to the sea, you can swim and you can hire a boat to sail to the blue caves. There is also a restaurant with a nice view... but the menu does not impress ... 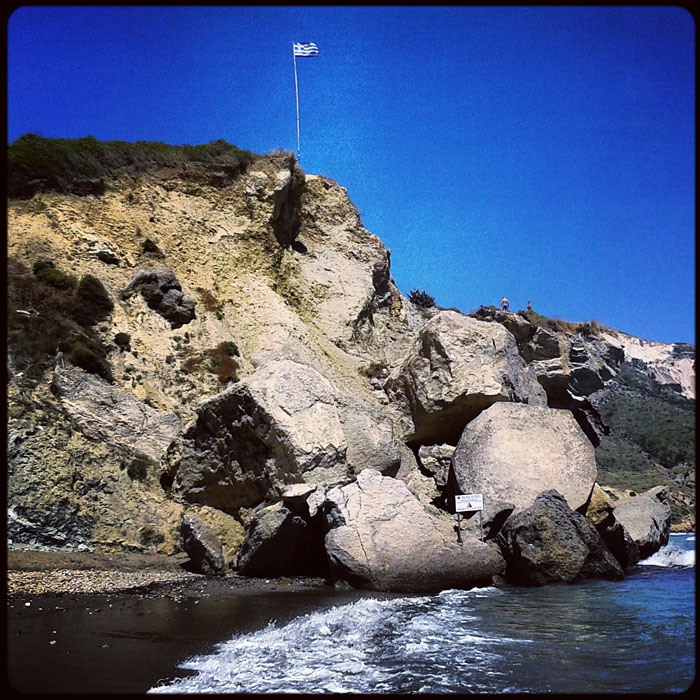 Rock at the beach. In my opinion the rock looks like a turtle, which enters the sea ... 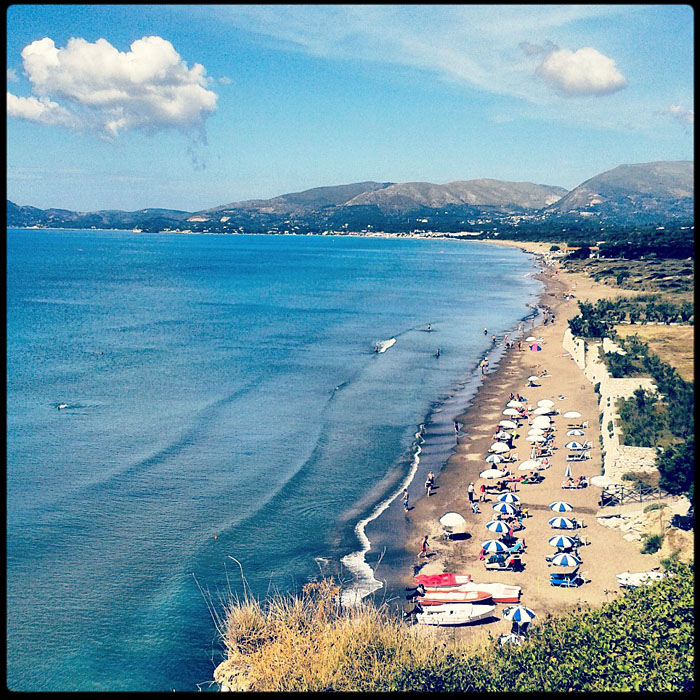 The narrow beach that you can go from Kalamaki to Laganas. Sea turtles lay eggs at night on this beach. Access to the beaches is prohibited after dark. 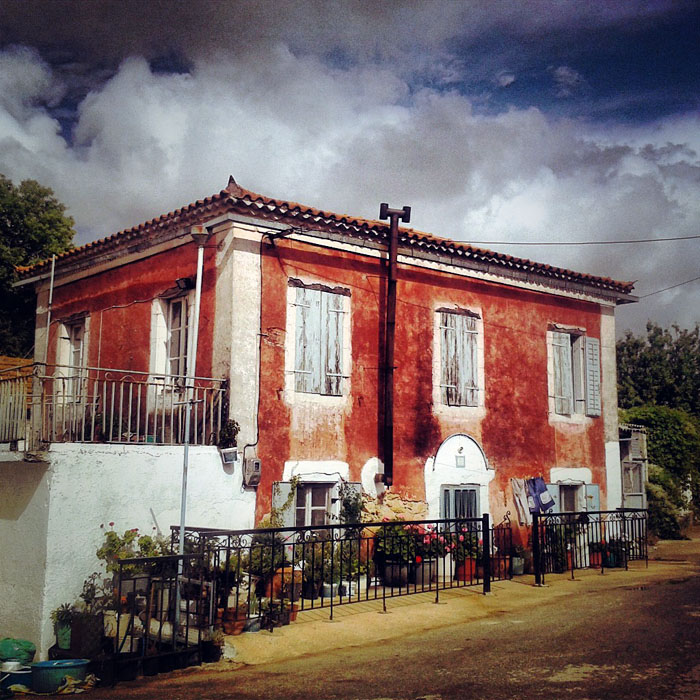 The earthquake in 1953 destroyed most of the buildings on the island but you can still find traces of the Venetians. 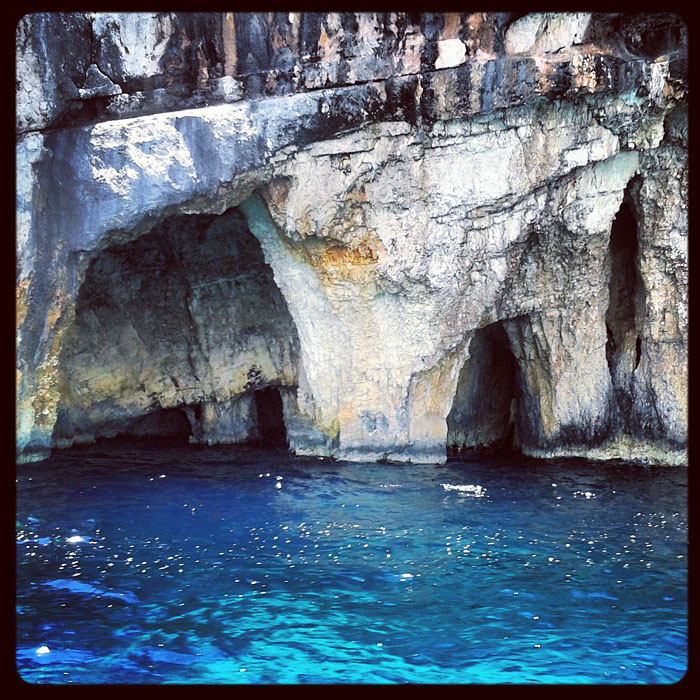 In the north of the Zakynthos at Cape Skinari you will find the magnificent Blue Caves. It is most famous natural attraction on Zakynthos. 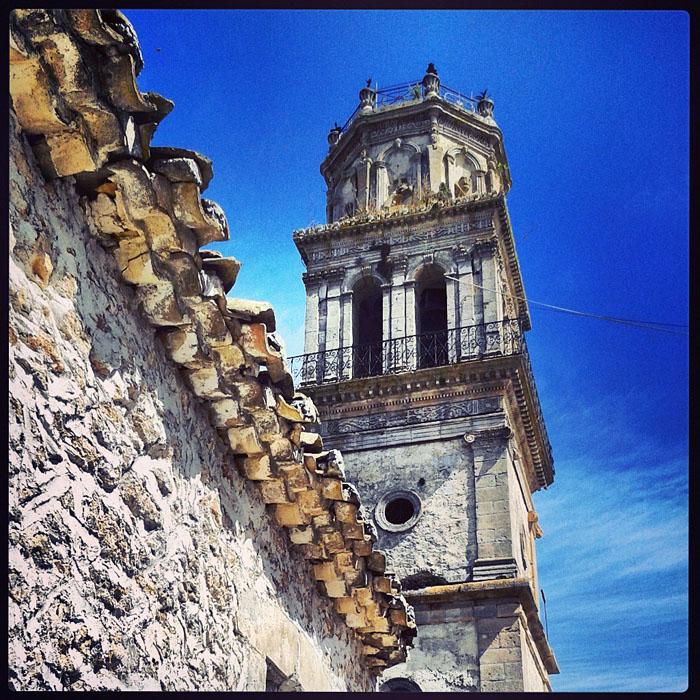 Zakynthos (Zante) - beautiful Greek island in the Ionian Sea. There are not too many sights to see - A powerful earthquake damaged more than 90% of the buildings on the island in August 1953. 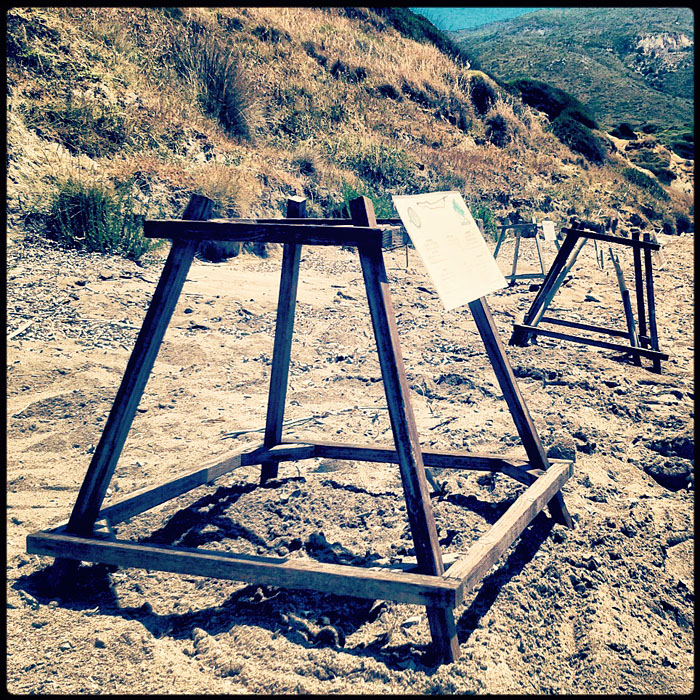 The loggerhead sea turtles (Caretta caretta) nesting on beaches near Laganas, Zakynthos. The little turtles hatch after two months and quickly go into the sea. 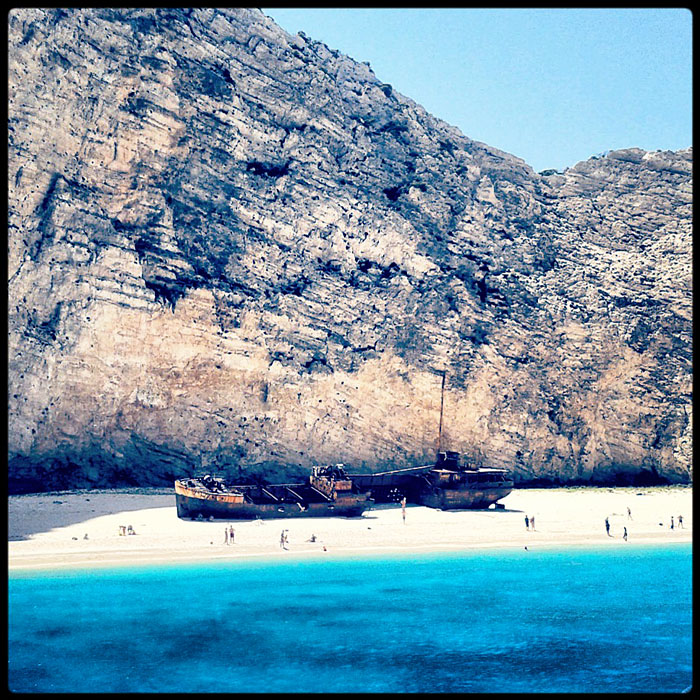 Navagio (Shipwreck) Bay - Zakynthos Island (Zante). Navagio Beach - one of the most beautiful beaches in the world and yhe most photographed beaches in Greece. 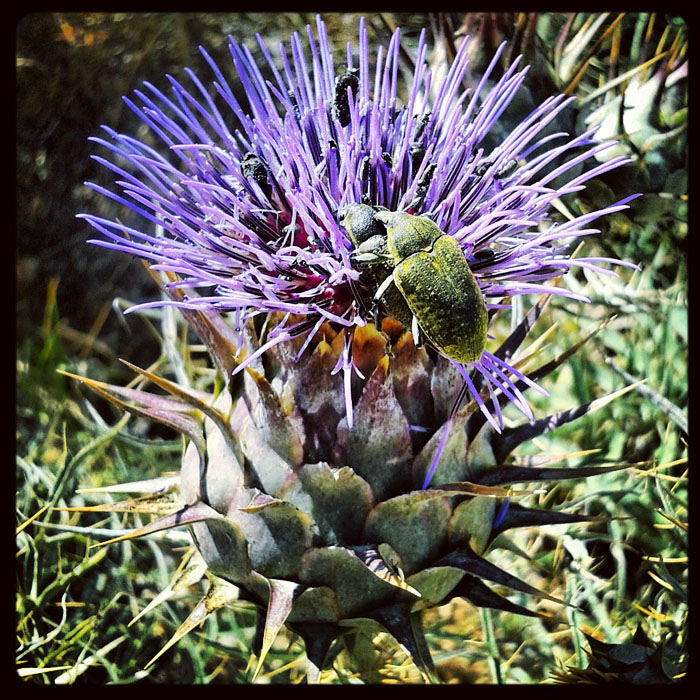 Love in the bushes

Warm, sunny, summer, vacation and relaxation.... all these things leads to love .... Someone wasn't able to stop :-) 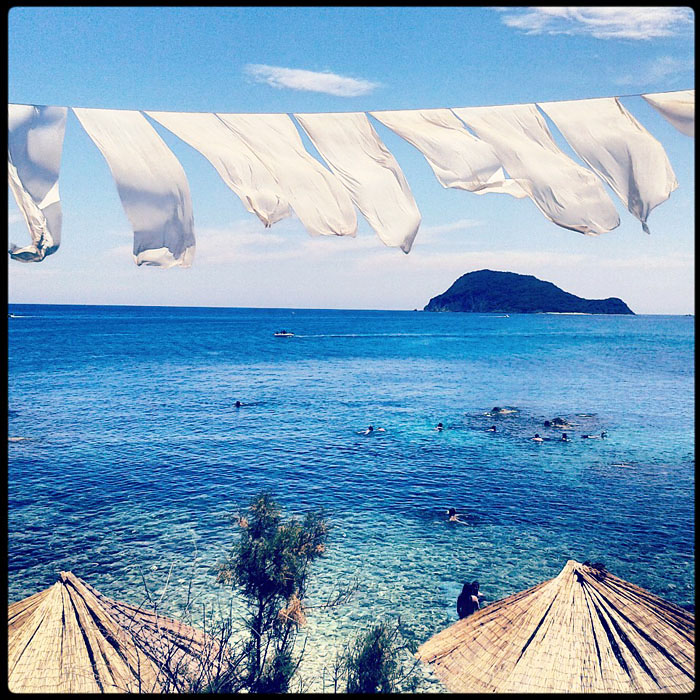 Small island Agios Sostis (Cameo Island) near Laganas. Aghios Sostis is one of the most beautiful places in Zakynthos. Little beach and total Chillout - it looks like a small Paradise! white material blowing in the wind - I immediately reminded of: Magnificent U2 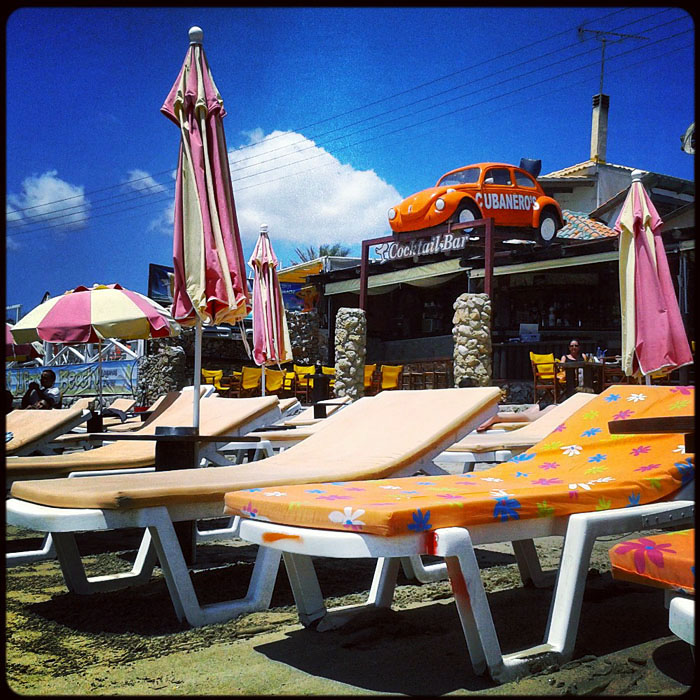 Looking for parties, fun, entertainment and wild nightlife? You must to go to Laganas! 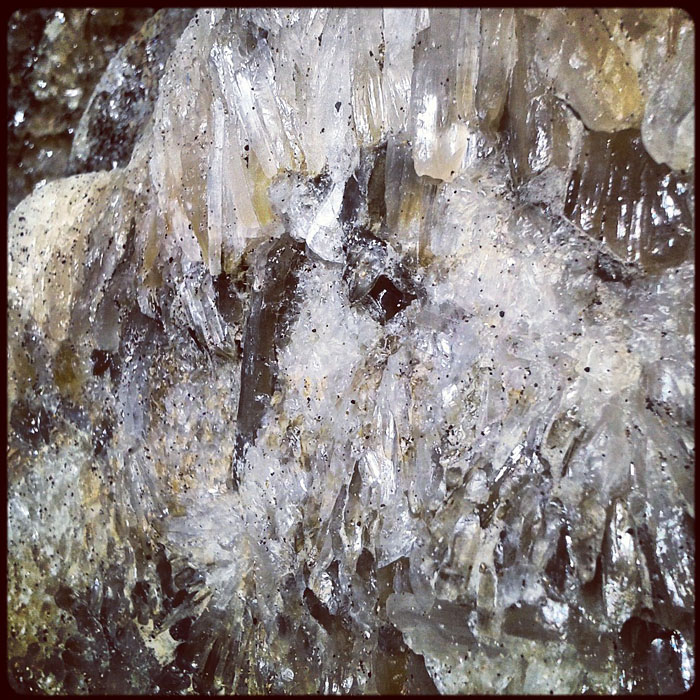 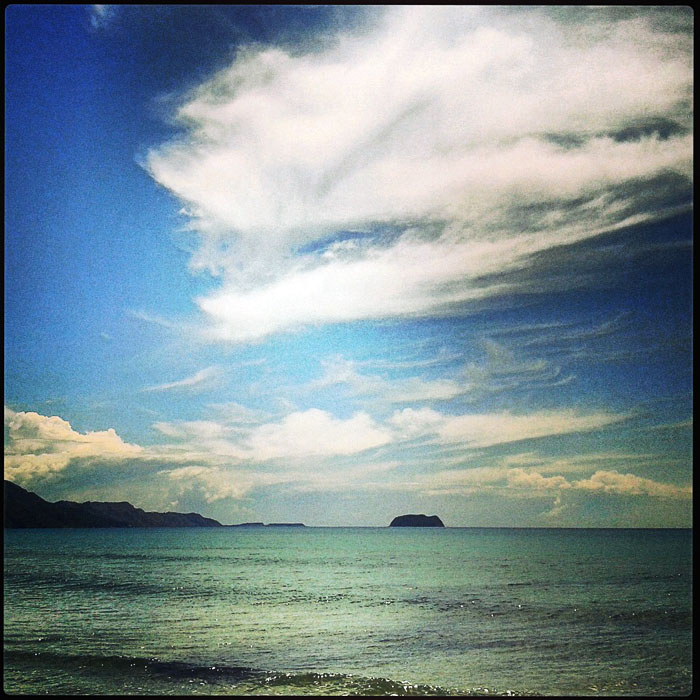 Sea ​​turtles lay eggs on the beaches of the Bay of Laganas. If you are lucky you can see loggerhead sea turtles (Caretta caretta) in the sea near the beach! 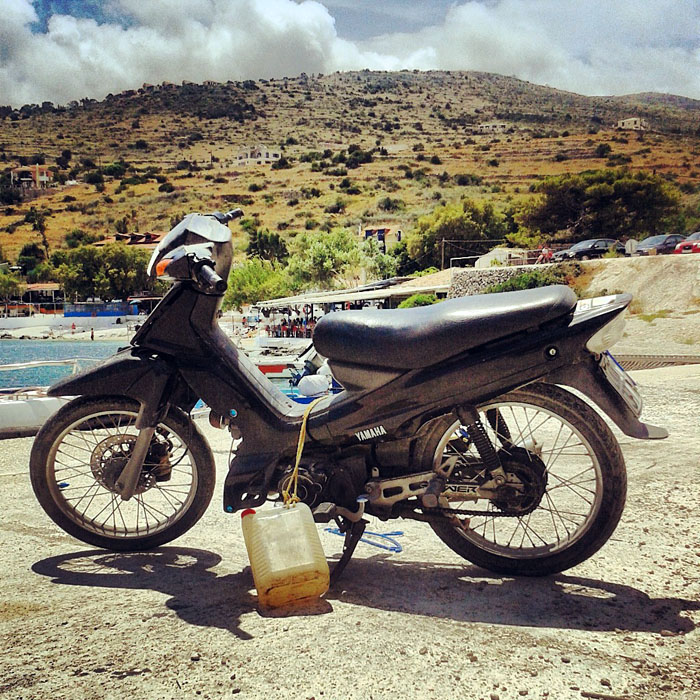 Agios Nikolaos harbor, Zakynthos. You can rent a boat and sail to the Blue Caves in the Agios Nikolaos. We sailed classical Greek fishing boat. Best trip!